Jim Hendry has been fired.

It still doesn't feel real yet.  What an amazing day this is.   After all my ranting though here it turns out he's actually been fired for almost a month now.


The actual firing was done on July 22, but Hendry wanted to help the team by staying on through the July 31 trading deadline.

Awesome.  Maybe next we'll find out Alfonso Soriano retired back in April but wanted to finish this season out before falling off the face of the earth.
Posted by Jake the Terrible Cubs Fan at 9:59 AM No comments:

Email ThisBlogThis!Share to TwitterShare to FacebookShare to Pinterest
Labels: Jim Hendry, This team is terrible

So Jim Hendry is still the GM for the time being.  I'm done.  I can't do this any more. Any owner willing to keep Hendry, Crane Kenney or most of this staff around any longer doesn't care about winning.  Ricketts has had two years to evaluate Hendry's work.  And the result has been a shitty team getting shittier.  He's made no moves that show any promise to improve the club in the foreseeable future and yet the team still carries one of the highest payrolls in the National League with nearly nothing to show for it. Meanwhile ticket prices are out of control and fewer people are going to games.  This team isn't fun to watch any more.  It really hasn't been for a few years now and I'll be damned if I'm going to step another foot inside Wrigley Field with the current management still gainfully employed.

I've stuck with the team through lots of crap.  But I'm tired of watching the team I love have their upper management drop an enormous shit on them each season. I'm through giving you my money only to see it squandered.

Posted by Jake the Terrible Cubs Fan at 9:45 AM No comments:

Email ThisBlogThis!Share to TwitterShare to FacebookShare to Pinterest
Labels: Boycott the Cubs, Jim Hendry, This team is terrible

Jeff Baker, the Cornerstone of a Winning Franchise

So the Cubs have the second worst record in the majors and thus look like major sellers with the trade deadline fast approaching. But who do the Cubs even have worth trading?

First of all let's cross out the ridiculous ones folks seem to be mentioning.
So who is available for trade?  How about Reed Johnson, Carlos Pena, Jeff Baker, Kosuke Fukudome...

Oh wait. My bad. Take Jeff Baker off that list. Hendry won't trade him.  That's right according to an article a few days ago Hendry says Baker is not on the table. Why? Good question. Let's refer to Ken Rosenthal's piece:


The Cubs do not intend to trade Baker, envisioning him as part of their team for next season, according to rival executives. The Red Sox and Indians are among the teams that showed interest in him, sources say.

Baker, 30, earns $1.175 million and will remain affordable in 2012, his final year of salary arbitration before becoming a free agent.

The Cubs are under no pressure to shed payroll, sources say. GM Jim Hendry also is mindful of fielding a competitive team next season, even though he may not return.

It's Jeff fucking Baker! The guy doesn't even have a regular starting job, nor should he. But he's crucial to having a competitive team in 2012? Clearly he's been the reason for the Cubs success in 2011! That last sentence is priceless. You know why you "may not return" Jim? For making asinine decisions like saying Jeff Baker is untouchable! Sweet fucking Christ, while you're at it maybe you should give Jeff Samardzija an extension on that atrocious contract you gave him a few years back.

I have nothing else to say. I'm a terrible Cubs fan.
Posted by Jake the Terrible Cubs Fan at 8:30 AM No comments:

Email ThisBlogThis!Share to TwitterShare to FacebookShare to Pinterest
Labels: Jeff Baker, Jim Hendry, punching myself in the cock, This team is terrible

Elias Sports Bureau has reported what we have long suspected for a while......

Posted by Jake the Terrible Cubs Fan at 6:58 PM No comments:

Email ThisBlogThis!Share to TwitterShare to FacebookShare to Pinterest
Labels: Cubs, John Grabow, This team is terrible

A Short Summary of ESPN's Coverage of Cubs vs. Red Sox

Hey did you know that Fenway was built in 1912 and Wrigley was built in 1914?  Also this is the first time these teams have played each other at Fenway since 1918.  Also did you know the Cubs haven't won a World Series since 1908?  No, seriously.  1908.  That was the last time.  1908.  A lot of shit has happened since then.  I mean that's a really long time.  1908.  Fenway Park is old by the way.  It was built in 1912.  Two years before Wrigley was built.  Back in 1918 the Cubs and Red Sox played each other here in the World Series.  That was the last time the Red Sox won it until they won in 2004.  The Cubs though, they haven't won a World Series since 1908.  That's a really fucking long time guys.  Like really long.  GREEN MONSTER!  How unique.  This park is unique.  This park eats and shits history for breakfast.  History of the GAME!  The game of baseball.  The Red Sox play baseball at Fenway Park.  Fenway Park opened in 1912.  It's nearly 100 years old.  You know what's older than that?  The Cubs World Series drought.  You see, believe it or not.  The Cubs haven't won a World Series since 1908.  The only people that remember that series are fucking dead now.  So don't believe someone if they say they saw it.  Unless that person is a zombie of course.  Bobby Valentine is a zombie, what with that weird blonde hair now.  Bobby always had dark hair so the only explanation is that he's now the undead.  Maybe he was at the last World Series the Cubs won.  That was in 1908.  The Cubs have been cursed ever since.  1908.  That's like 4 years before Fenway Park was built.  Fenway was built in 1912, while Wrigley Field was built two years later.  Look at the Green Monster!
Posted by Jake the Terrible Cubs Fan at 7:25 PM No comments: 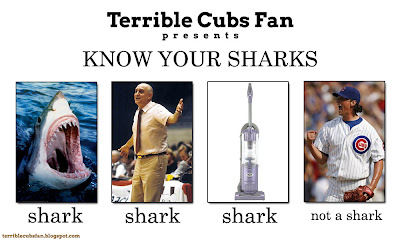 Jeff Samardzija doesn't deserve the nickname "Shark". To have a cool nickname you have to actually do something cool or worthwhile, and frankly, costing the Cubs millions of dollars to be a mediocre pitcher is not cool.

Nevermind he got the nickname from his football teammates at Notre Dame. If he wants to go relive the glory days back in South Bend he can "Shark" it up all he wants there. But in Chicago that nickname does not exist. Until he manages to do something worthy of being "Shark" he will be known as "Smarch" instead.

Posted by Jake the Terrible Cubs Fan at 8:25 PM No comments:

This team was awful last season.  Awful to the point that I really stopped watching after August.  On the likability scale the 2010 Cubs would rate somewhere between the 2004 Cubs and the rock bottom 2006 Cubs for least likable.

And yet, here we are, just a couple hours from the 2011 season kicking off and I can't help but be excited for this team.  Why do I find this team so much more enjoyable than the putrid version from last year?  Thinking about it, I quickly came up with a list of reasons why 2011 is so much better. 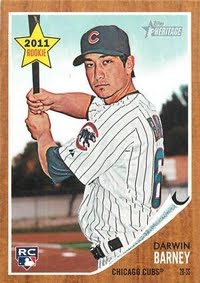 Look, I'm still a realist.  Do I expect the Cubs to win the division?  Yeah, probably not.  But I can see this team winning 80 games and keeping things interesting all season.

Is this the year?  Oh lord no.  But at least it should be a fun one.
Posted by Jake the Terrible Cubs Fan at 9:21 AM No comments: